Top Posts
What Mouth Guard Does Steph Curry Wear?
Best Ways To Save Money in 2021
How To Fix Teeth Moving
Sporting Smiles Celebrates 12 Years
What Happened To SmileLove Retainers
Why Are My Teeth Moving With A Retainer?
TMJ Ringing
How Do You Remove Plaque From A Mouthguard?
Dental Glue For Retainers
How Do I Clean My Night Guard
Home Retainers The History of Orthodontics
RetainersSportingSmiles

The History of Orthodontics

If you ask people why they are happy to live in the modern age, many of them will respond with “Dentistry!”. It may seem like an odd response to those of us that dread our annual checkups. However, it is a much-overlooked perk of modernity that we should all be thankful for. This is mostly because of horror stories about the state of dental care before the advent of modern medicine. As bad as a visit to the dentist or orthodontist may seem to some people, the idea of living with crooked teeth and a never-ending toothache is far worse. While it is true that orthodontics and dentistry prior to anesthesia must have been an unpleasant experience, the history of orthodontics is actually much longer than most people think.

Humans have been dealing with their tooth pain and rearranging their smiles for over 2,000 years now. Archaeologists have found devices designed to treat malocclusion, abnormal alignment of the teeth and jaw, on mummified remains dating back to the Egyptian empire. Crude metal implements were discovered wrapped around teeth. Experts theorize that catgut was used to guide the teeth and keep them in position. While it is quite amazing that orthodontic devices go back this far, the reality is that it would only have been accessible to a tiny portion of the population, and was localized to certain regions and cultures.

Dentistry as We Know It

Pierre Fauchard created the first true set of modern braces in 1728, making him known as the “Father of Modern Dentistry”. His device used flat strips of metal and string to draw the teeth together. While crude, they were closer to what we see in modern orthodontics. They used the same principle of an individual connector on each tooth, allowing for more accurate adjustment. Thankfully, since then orthodontics has made leaps and bounds. The addition of wiring and rubber bands dates as far back as the mid-1800s. Modern braces have continued to improve on these early designs. The next major development in orthodontics came with the invention of the retainer device by Dr. Charles Hawley, which preserves the orthodontic adjustments after the braces come off. 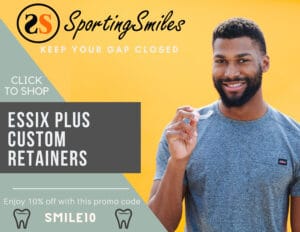 The Hawley retainer is named after its inventor and remains one of the most well-known methods for protecting teeth alignment, despite the fact its design is from the early 1900s. As an adjustable retainer, it allows for corrections by the orthodontist. This can be useful if the braces did not fully correct the malocclusion. While still popular, the Hawley retainer has begun to be eclipsed by the most modern orthodontic development, the Essix retainer. Invented by John Sheridan 1993, the Essix retainer allows for maintenance of teeth alignment while being significantly less obtrusive than the Hawley model. Made from thin, clear PVC material, Essix retainers have become hugely popular. You can wear these without impacting speech or obscuring your smile.

At SportingSmiles, we like to stay at the cutting edge. That is why we have found a way to bring retainers to our customers at the lowest price possible. We cut out the middle man of dentists and connect you directly with dental labs. The same dental labs that dentists and their teams use. This allows us to give you the latest in orthodontic technology at a fraction of the price that dentists would charge you. With our Self Impression kit, we acquire an accurate impression of your teeth. Then we make a custom retainer that fits your mouth and teeth perfectly. This helps keep you comfortable and your smile looking great.

If you have any questions at all about which retainer solution is right for you, feel free to reach out to our team. The Difference Between Essix and Hawley Retainers

Dreams About Teeth Falling Out

How To Fix Teeth Moving

Why Are My Teeth Moving With A Retainer?

How Do You Remove Plaque From A Mouthguard?

How To Prevent Teeth Moving After Braces